Beacons of Badassery is an interview series shining light on strong women.

After spending most of my life trying to prove that I’m strong enough to be one of the guys, I’ve realized that instead of trying so hard to fit a certain expectation, we should be redefining what it actually means to be strong.

These women are doing just that.

When I was preparing to move to Colorado, I searched for production companies in the area and stumbled upon Wheelie Creative, an agency helmed by Lisa Slagle. Based in Whitefish, Montana with a satellite office in Denver, Wheelie is clearly doing cool things in outdoor branding and marketing.

Over the summer, I had the opportunity to meet Lisa at Outdoor Retailer, and she was just as awesome in person as she appeared online. As I learned more about her efforts to empower women behind the camera in the outdoors, I knew she was definitely a Beacon of Badassery, and I’m excited to share her thoughts here. 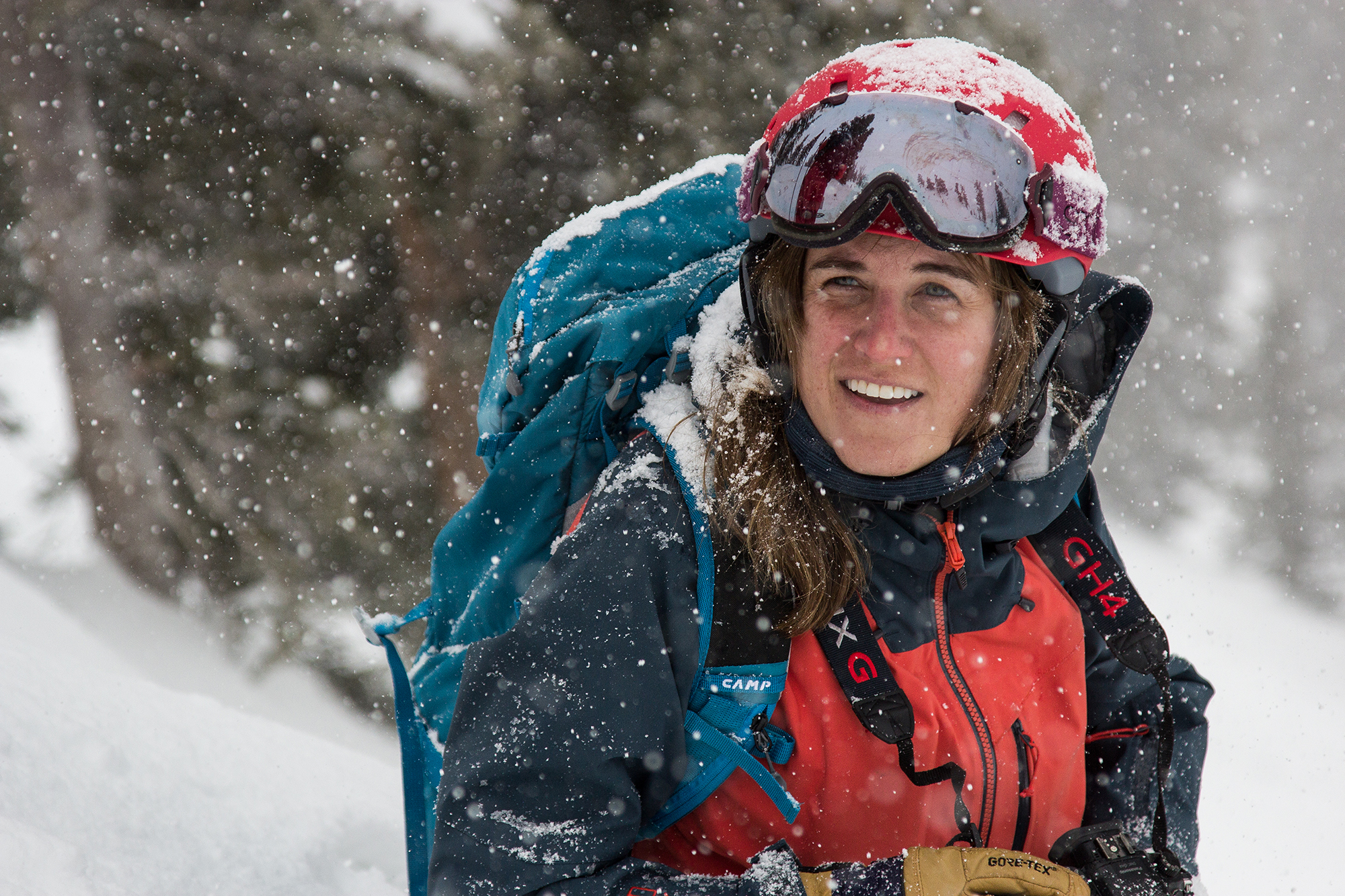 You started your career networking on chairlifts as a snowboarder. How did you first get into snowboarding and the outdoors? Why is it so important to you to incorporate that into your career?

I worked at a Cold Stone in high school. I saved all my tip money, and bought my first snowboard setup for $500 in one dollar bills.

Snowboarding has defined my life since I was 16 and strapped into a snowboard for the first time. It’s how I’ve met the majority of the people I love the hardest. It’s how I’ve explored and chosen to travel and live, from the grandeur of pristine peaks to the underbelly of ski bum bars. It’s how I’ve spent lots of cold nights in parking lots in the back of my truck, chasing storms around and drinking coffee in liftlines. It’s how I’ve been injured the worst. But I can’t help it — snowboarding is my everything.

It seems only natural that my career would pivot off the very essence of what makes my little world spin. I crave mountain towns, and as gratifying as skinning is, I don’t think I’ll ever choose to live in a town without chairlifts. I love pow laps too much. 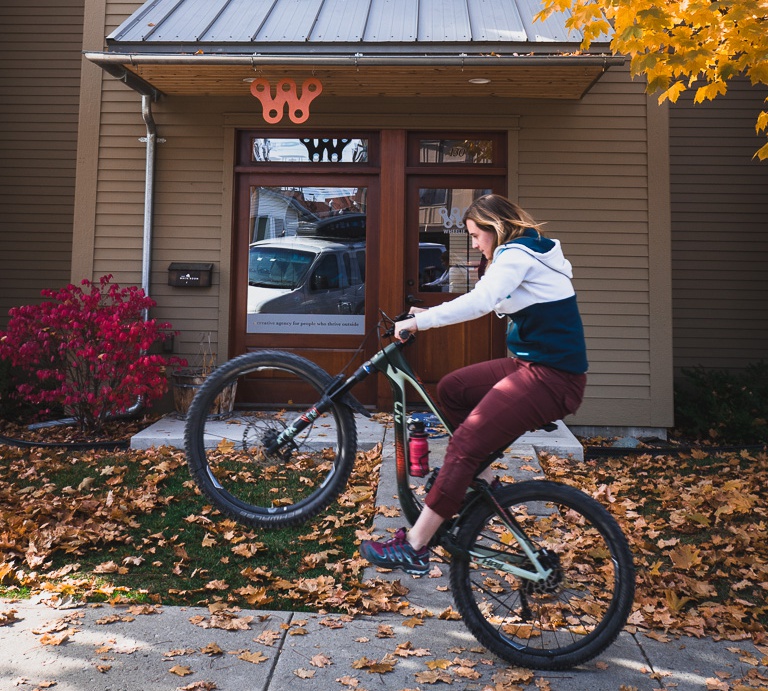 You make it very clear that at Wheelie, the agency you run, one of your goals is to empower women, and you take this into your work with clients. How did this become such a core value at Wheelie? Did you find that the outdoor industry was a boys club when you started out?

It’s funny — every time I post a job at Wheelie, like 2 dudes apply for it and like 100 women. I think women are attracted to an office full of other creative ladies, killing it and having fun. I always hire what I hope to be the most qualified candidate for the position, and with stats like that, I end up hiring a lot of women. Which is awesome because women are awesome.

Don’t get me wrong — I love dudes, so I think it is important to point out that elevating women is not mutually exclusive to elevating men. But it is an important thing to do. The more perspectives we can bring to a project, the bigger the story we can tell and the more people we can reach. 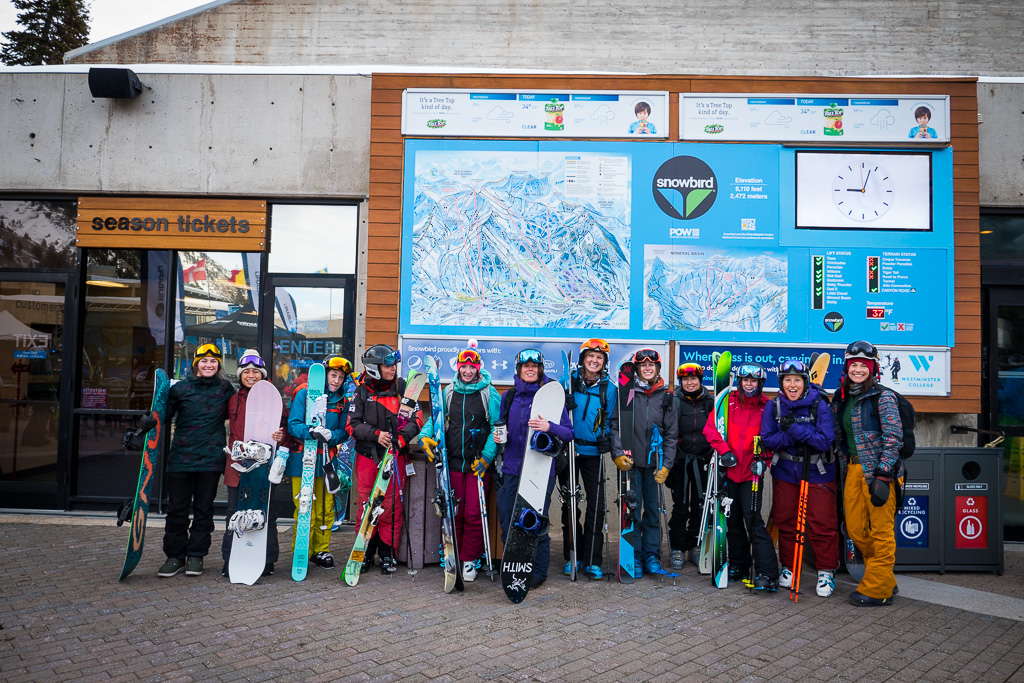 At the last couple of Outdoor Retailer shows, a big issue being brought up is how the outdoor industry in general and its marketing specifically is mainly targeted to white men. You are definitely working hard at bringing women into your company and campaigns, but how do you address racial diversity and other representation as well? (I ask this question because I realized I’ve only been asking similar questions to women of color that I’ve interviewed, but we all need to be addressing this.) 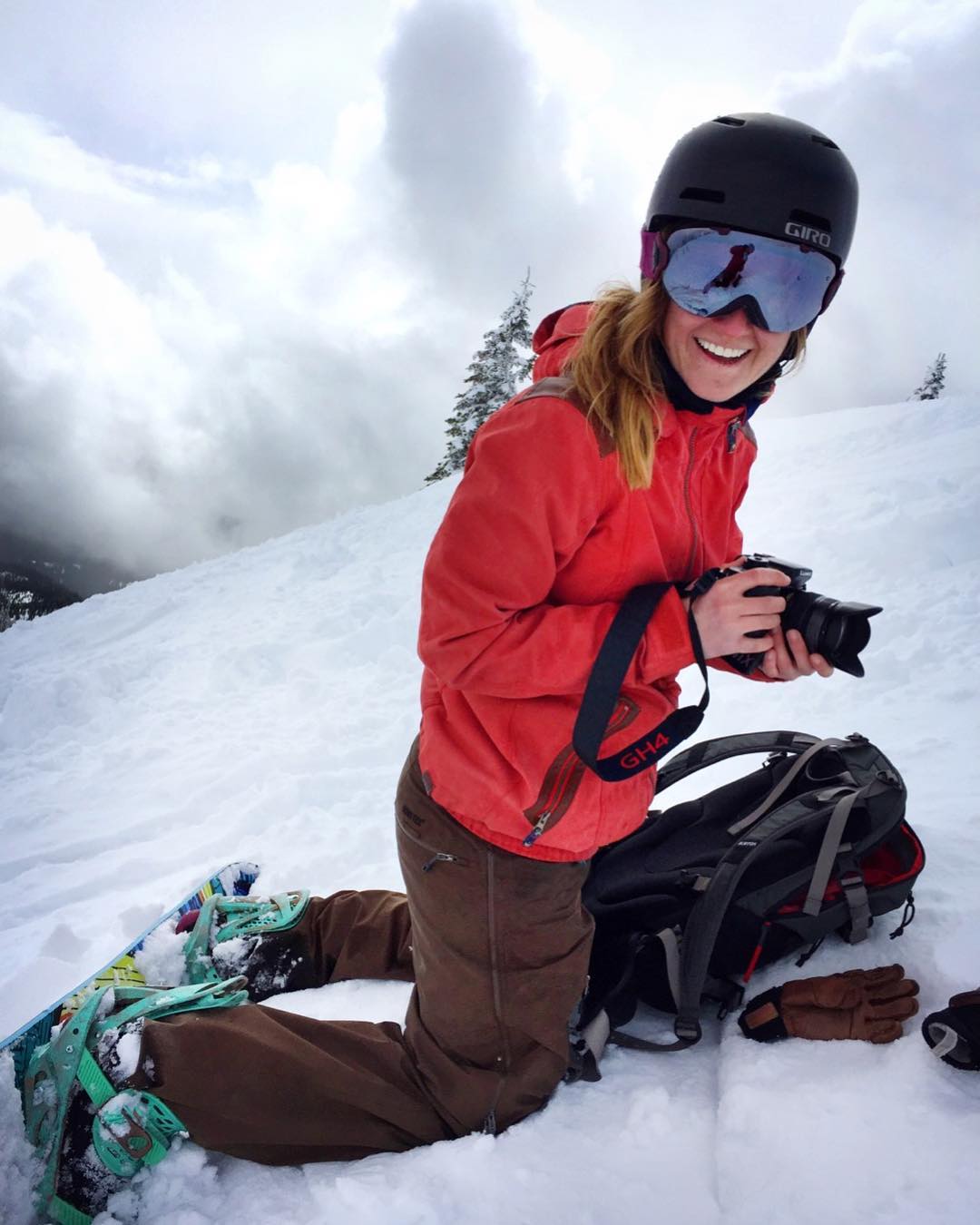 You told me that you looked around once and realized it was always a “dude with a camera” in the outdoor & action sports industry, so you started Wheelhouse Workshops with a mission to get more women behind the lens.

As a woman who has worked as a videographer in sports, I know exactly what it’s like to be the only woman with a camera. One of the things that Wheelhouse Workshops does is show women other women behind a camera, which is huge, and it also helps build confidence by teaching women technical skills. But from my own experience, there is a lot more that impedes women as they try to enter the industry. What else do you think needs to be done to get more women actually working behind the camera?

SO much. First, you gotta be strong. You gotta have your layers dialed, snacks on point, know your backpack, and be able to lug a lot of gear around. You have to want it and work to get it. You cannot be the weakest link because then you are proving correct the bold assumptions that women don’t deserve to get the gig when there are five strong men vying for it.

Know how to operate in shitty conditions, both in the weather and your mind. Content creation is a very competitive landscape, but also has more opportunity than ever, so get up early and get the shot. Don’t tell people you deserve to be there — show them. 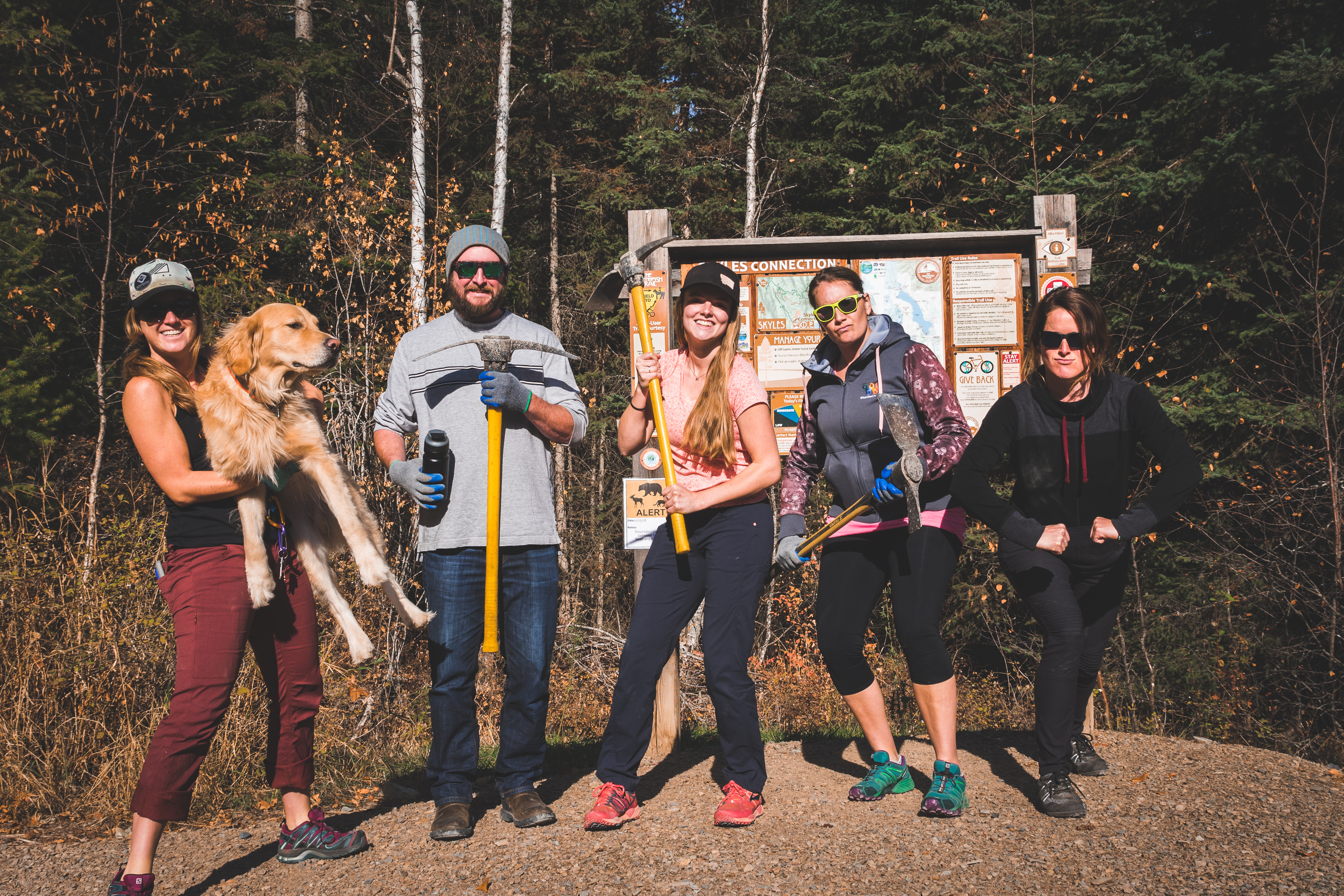 Taking care of the environment is also core to the Wheelie crew. You maintain trails in Montana, print sustainably, use email proofs when possible, and bike everywhere! As the outdoor industry encourages more people to get outside, how can we best minimize the impact to our natural spaces?

Oh man, the ongoing question. I don’t know what is best, but I hope everyone strives to give back. We are nothing without the planet, and I hope everyone tries their best to take care of it.

In Montana, we can’t recycle very much, and composting is terrifying because of grizzly bears, so it is easy to feel helpless in the fight against climate change. But everyone can always do more. Everyone can do something. And it helps to band together as a business or as an organization for strength in numbers. We’re working on a Climate Action Plan with the City of Whitefish right now, and it has been fascinating learning how mountain communities face different issues than cities and what to do about it.

You’ve based Wheelie in Montana – what makes Whitefish such an amazing place for outdoor adventures? What are some of your other favorite places to get outside and explore?

Whitefish is awesome — summers here are unreal. It’s light outside until like 11pm. In winter, the skiing is great. I’m lucky to have a business full of wildly talented humans based out of this paradise. Other places I love are Colorado, Moab, and Revelstoke.

Thanks for sharing your perspective, Lisa – and for making sure that outdoor marketing also has the perspective of badass women!

Find out what’s going on at the Wheelie Creative HQ, and follow Lisa’s awesome adventures on Instagram!

Two years ago, I wanted to lead this route but did

A little morning multipitch to start the day off r

Had a high-gravity day, but still had a blast foll

Outdoor Retailer moved to Denver at basically the

Just a casual cragging day to get outside before h

Break through your photo plateau with Beta for Better Climbing Photos!
Inspiration